I have written in the past about the significance of the Left Behind movie's production date and release dates running simultaneously with the top four Satanic holidays. I have since then calculated the odds of this happening by chance. I will give a quick review first.

There are 8 primary holidays in witchcraft and Satanism. In the Illuminati they are known as the 8 nights of human sacrifice for obvious reasons. There are four major and four minor ones:

The odds that Peter LaLonde hit those four Occultic days by chance with his production and release dates is 1 in 17,458,601,160. Or one in seventeen billion, four hundred fifty-eight million, six hundred and one thousand, one hundred sixty. If you believe this is a coincidence then you probably believe it was a coincidence that Jesus died on Passover, was resurrected during Feast of Firstfruits and that the Holy Spirit fell and the church was born on the Feast of Pentecost.

But how could these guys be seeking Satanic blessings? After all, isn't the movie a great witnessing tool? Only if your gospel message is changed to being raptured to avoid the hard times which are coming to this earth. There was no true message of the cross, the atoning blood of Christ, repenting and believing on the name of Jesus for salvation. No scripture was used for this purpose, no sinner's prayer. An unsaved person watching that movie has no idea of the true meaning of salvation. And if he is converted by someone, due to the messages in the movie or book series, he will walk away from this faith when he realizes the tribulation has started and that he was lied to.

Is this another coincidence below? 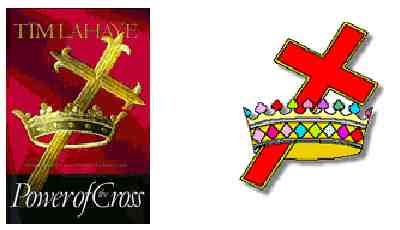 The picture on the left is the cover of the recent book (1999) by Tim LaHaye called The Power of the Cross. The one on the right is a centuries old Masonic symbol and can be seen on an official site of the Knights Templar at http://www.knightstemplar.org/   Some might mistake it for a Christian symbol, but Masonic author Ray Denslow reveals its true meaning:

"The Cross and Crown may be said to be confined almost exclusively to the historical degrees in Masonry as exemplified in the various orders of knighthood of York and Scottish rites. In Gaul we find the cross to have been a solar symbol when it had equal arms and angles; to the Phoenicians it was an instrument of sacrifice to their God, Baal; and to the Egyptians, the crux ansata was his symbol of eternal life." (Ray V. Denslow, Masonic Portraits, Transactions of ths Missouri Lodge of Research, vol. #29, p.7---emphasis in the original)

Masonic authority Albert Pike also wrote of the meaning of the above symbol in his book Morals and Dogma, explaining that it has a sexual connotation to it as well. (Why is this symbol on a 'Christian' book cover?)    Was it also a coincidence that LaHaye and his associates set up their Pretrib Research Center in a place that's considered a vortex of occultic power in Washington D.C. They were located on L'Enfant Promenade,  a street named after the Mason Pierre Charles L'Enfant who designed the city in Masonic and Occultic symbols.  From there, coincidently, they moved their research center to the Dallas area, another city that is sacred to freemasonry because of its proximity to the 33rd degree of latitude.  Christians aren't supposed to believe in coincidences.

WHY HAS THE THIS SYMBOL BEEN USED FOR LAHAYE'S BOOK?
"The Power of the Cross"

Why is the Luciferian Freemasonry Knights' Templar symbol on Tim LaHaye's book?

One Masonic symbol that appears to be Christian is the cross and the crown emblem. However, this is not the case. Masonic author, Ray Denslow, reveals:

"The Cross and Crown may be said to be confined almost exclusively to the historical degrees in Masonry as exemplified in the various orders of knighthood of York and Scottish rites. In Gaul we find the cross to have been a solar symbol when it had equal arms and angles; to the Phoenicians it was an instrument of sacrifice to their God, Baal; and to the Egyptians, the crux ansata was his symbol of eternal life."'44 [Emphasis in the original]

In The Masonic Report we find more about this emblem:

"Question: What does Masonry's emblem of the 'Cross and Crown' actually symbolize?

"Answer: The 'Cross' of Freemasonry is a philosophical cross, according to Albert Pike, 'Morals and Dogma,' p. 771. It is philosophical in the sense that it represents the generating fecundating principle by the perpendicular shaft, 350 MASONIC AND OCCULT SYMBOLS ILLUSTRATED and the matrix or womb of nature, the female producing principle by the horizontal shaft. The philosophy of the Masonic cross is totally phallic. "The 'Crown' of this Masonic emblems is also phallic, it being the first emanation of the Cabalistic Sephiroth...."4'

"The other York Rite jewelry you may see is the Templar symbol....It is a large Maltese cross with a circle in the center.  Inside the circle is a red Latin cross within a crown. Around the arms of the cross is the Commandery motto, 'In Hoc Signo Vinces.' (In this sign, conquer!)

"Although this may seem harmless enough, the motto is originally attributed to the emperor Constantine, who used it in conjunction with a supposedly
heavenly vision to begin the subversion and politicization of Biblical Christianity into the false, apostate Alexandrian cult....

"A similar shell game is played with the word 'sign.'... The sign Constantine referred to was NOT a Christian cross, but a kind of 'X' which had both Christian and pagan associations. In modern magic, it is the sign of the slain and risen Egyptian god, Osiris (another version of the 'slain and risen' Hiram Abif).

-Again Masonry has downgraded Jesus and replaced Him with its own 'christ'." [Emphasis in the original]

Two other groups (both with Masonic connections) use the cross and crown. Charles Taze Russell was a Mason who started the Jehovah Witnesses.'4'  He used the red cross and other distinctive features of the Knights Templar logo.'"

He also used the Masonic symbol of the winged sun-disk with snakes and he is "buried in a pyramid with masonic symbols on its capstone." 149

The other group that uses the cross and crown emblem is Christian Science. This group was founded by Mary Baker Eddy in Massachusetts but Mason Henry Steele Olcott, who was co- founder of the Theosophical Society with Helena Petrovna Blavatsky,'" was an associate of Mary Baker Eddy.'" Some Eddy Brothers held seances and it was at these seances that Blavatsky met Col. Henry Steele Olcott.'" Mary Baker Eddy herself had married a Mason and this was the only secret society which she allowed other Christian Science members to join.'" She even had some of her material published in the Freemason's Monthly Magazine. "4 Several people connected with Christian Science such as directors and board members and a number of the editors of The Christian Science Monitor were Masons.'" Even the presidents of the Mother Church in 1922-23 and 1923-24 were Masons.'"

Why is the Luciferian Freemasonry Knights' Templar symbol displayed on the cover of Tim LaHaye's book?

Tim and Beverly LaHaye are associated with Sun Myung Moon, whose teachings are permeated with phallic themes. See: The Council on National Policy & Sun Myung Moon.

The reader is encouraged to check out the LaHaye's profiles on our Council for National Policy Database.  Tim LaHaye was the first president of the CNP in 1981. Numberous other CNP members have occult and one world government affiliations. Anyone who investigates this 500+ member organization will discover the strange bedfellows of the so-called Christian Right.  If you have not done so, please read our expose of the Council for National Policy and Database of Past/Present Officers and Prominent Members